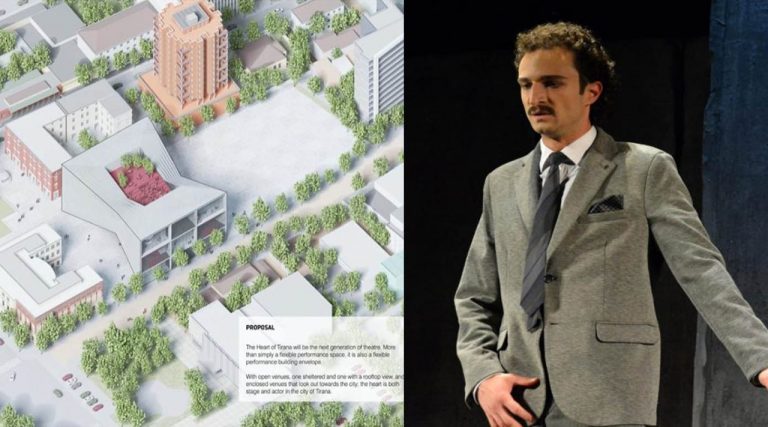 TIRANA, May 21 /ATA/ To actor Donald Shehu, the artists of the National Theatre should not divide themselves into enemies or loyal to the people, instead they should deal with art.
With such an appeal, the actor Shehu tells the Albanian Telegraphic Agency that actors of all generations, be them young or old, need decent premises to make art.
According to him, at this moment, the artists should pull together like never before.

“As a young actor and with a short experience in performing at the theater, which was razed to the ground , maybe it is not up to me to tell its flaws, but as far as I could see, the theater was in a poor condition. I think that young and experienced actors need a decent, modern theater, up to contemporary parameters, as it is in our neighboring countries,” he says for ATA.
Shehu goes on saying that all the knowledge gained should be used by the artists to make art rather than to divide.

He says that it is just a building that was razed to the ground, it is not the theatre.

“We need a theater where we can put all the energy we have, all the knowledge we have gained in the school we graduated from, and I think we have to respect it for as much as it have given to us. My opinion is that it is impossible to put all this energy into the old theater, no matter how nostalgic and no matter how moved we are to witness its demolition. Another aspect I would like to touch on is the unity among artists. We are very few, very few and it is not good for us to be split up. I am convinced that starting from next season we will play together on stage, whatever it is, so we should not label and divide ourselves into enemies and loyal to the people. I am convinced that each of us with this profession and passion within wants the best for the profession and himself. I want to conclude with a phrase I have often heard these days: “A building has been razed, not the theater.”
/a.fortuzi/ z.tosku/r.e/sm/