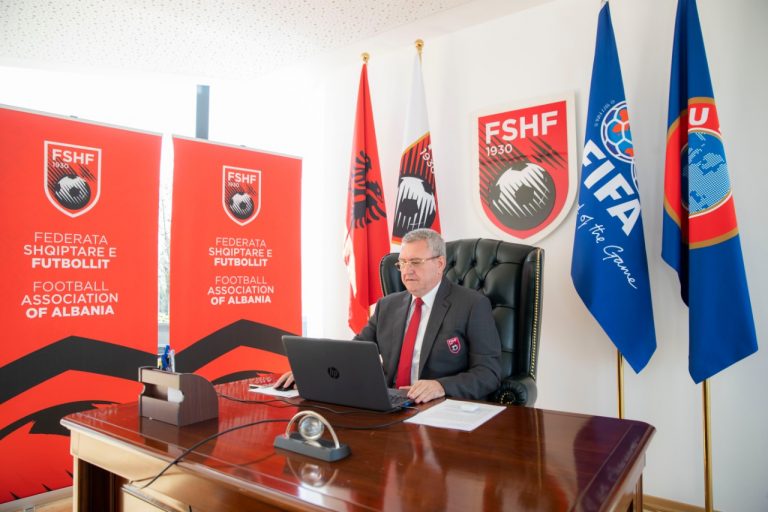 President of FSHF Armand Duka reiterated the request for the resumption of sports activities in context of relaxation of measures against the coronavirus.

Speaking about the objectives achieved last year, Duka stressed that the way to create new standards and improve the level of Albanian football is good.

“We are meeting those goals that we have set to ourselves through our Vision 2030 project,” he said.

According to him, during this period, large investments and high-quality works have been carried out, about which we are proud of.

“The construction of the “Air Albania” stadium was a great achievement. The modern 22,000-seat stadium, which has been the dream of every Albanian, is now an object that has been put at the service of the football community by making the matches more qualitative. It has also influenced the increase in the number of fans, which has made the race more interesting. Meanwhile, in Kukës, a stadium of 7,000 seats worth 6.5 million Euros is being built in cooperation with the Albanian Government. The stadium will be of category 3, where matches can be played, up to the group stage of the Champions League. I left it not without purpose in the end, a big investment of FSHF, the “Football House”. Today, this Assembly is organized and headed by the new headquarters of the Albanian Football. We would very much like to do the work in the hall built for this purpose, but the conditions of pandemic did not allow us to do so. The staff and the entire administration of the Association have already started work on this modern headquarters which will include within it, two football ministries with 500 seats each. There will also be a modern rehabilitation center, while the construction of a hotel for national teams will begin. This investment amounts to 9.5 million Euros “, said Duka./a.gjonaj/j.p/r.e/p.s./