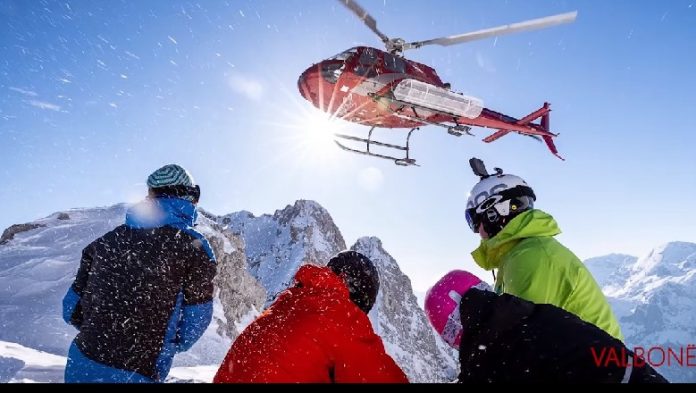 TIRANA, Feb 19 /ATA/ From now on all those fond of extreme sports can enjoy the rare beauties of the national park of Valbona, Tropoja, through an unseen adventure.

A helicopter ride for the Alps lovers is the newest tourist package offered in Valbona.
PM Edi Rama has published views of the landscape of Valbona, saying that this area thanks to investments in tourism was visited by over 130 thousand tourists in 2019 alone.

Valbona, Tropoja – An unusual adventure by helicopter over the Alps. Thanks to investment in tourism in 2019, this area was visited by over 130,000 tourists, including the foreign producers who have chosen Valbona for the backdrop of their films,“ Rama said.

Apart from the breathtaking scenery, the helicopter ride enables the tourists to ski on the slopes.
Minister Klosi said in an interview with the ERTV broadcast that “Valbona is a paradise of nature that never ceases to amaze its visitors. We are in Valbona to have a frank conversation with the hotel owners in the area and those who run accommodation services in the area to register the guest houses and hotels so as to include them into a certified and standardized system.”

“The whole point of all this is that this area should not be damaged by irregular investments that undermine its beauty, but also to increase the accommodation capacity. We also promote a very interesting tourist activity, which is one of the most expensive businesses in the world that offers the opportunity to climb the highest peaks and ski down the slopes by means of helicopter. It is a unique opportunity in the region and we want to promote it in our Alps. The Slovenian company that introduces this package is very satisfied with the destination. It will be a real boom in tourism of Valbona, ”Klosi said.

A representative of the Slovenian company said that “the nature here is breathtaking. So far we have brought here film production companies that are focused on the ski industry. For two years we have been shooting here with a team from the US and last year with a team from Switzerland. This year we brought with us some people from the industry, potential investors.
Minister Klosi said that January this year saw 17.8% more than in January 2019. Thus, Albania was visited by 234 thousand foreign nationals who were registered at the Albanian border.
/k.s/sm/