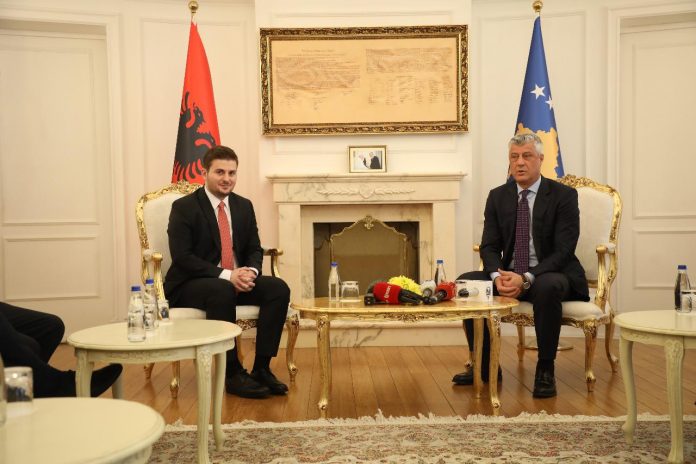 TIRANA, Feb 19/ATA/- During the official visit to Kosovo, the Acting Minister for Europe and Foreign Affairs, Gent Cakaj, held a meeting with the President of the Republic of Kosovo, Hashim Thaçi.

President Thaçi thanked Minister Cakaj for the visit the made to Kosovo, immediately after the celebrations of the 12th anniversary of the independence.

“Freedom and independence of Kosovo is directly linked with the contribution of Albania. An extraordinary, historic contribution. But at the same time, during the process of consolidation of our state, of Kosovo’s membership in international organisations and new recognitions, further consolidation between Prishtina and Tirana is warranted,” said President Thaçi.

The acting Minister for Europe and Foreign Affairs of the Republic of Albania Gent Cakaj said that he has been focused on consolidation of inter-Albanian relations in the region.

“We have also been engaged with the issue of recognitions of Kosovo, with all the capacities we had. We tried to do the best on strengthening the international subjectivity of Kosovo and in multilateral forums we made sure to, in those where Kosovo was not present, become the voice of Kosovo and address all the issues weighing upon its agenda, said Minister Cakaj.

The acting Minister for Europe and Foreign Affairs of the Republic of Albania Gent Cakaj thanked President Thaçi for the contribution provided by Kosovo to Albania after the November 26th earthquake.

“Solidarity of the people of Kosovo has been exceptional and the work of the institutions of Kosovo was unparalleled. We have proved by this that even though we are two separate states we are one nation and that our relations must expand,” said Cakaj.

The head of state continued that Minister Cakaj has given a new dynamism and a new soul to the spirit of affirmation of consolidation of the state of Kosovo all around the world, in all international instances where Republic of Albania is present.

“On behalf of the intuitions and of the people of Kosovo, I express the gratitude for your personal contribution, for the contribution of Prime Minister Rama and of all the institutions of the republic of Albania, which have a unified stance on Kosovo,” said President Thaçi.