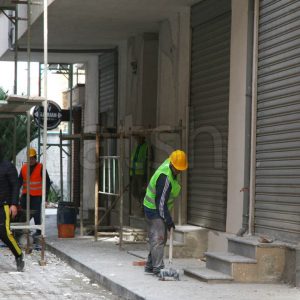 TIRANA, Feb 11 /ATA/ PM Edi Rama saw first-hand the process of post-earthquake rebuilding which consists in reconstruction of 1 679 apartments by March 26 in buildings declared out of use or those that have been slightly damaged.

Rama stopped in at one of the apartment buildings that have sustained minor damage technically rated DS2, meaning it has not sustained structural damage and is suitable for living after repairs.

Mayor of ë Durrës, Zhulien Varfaj, briefed PM on the progress of reconstruction in this city in the aftermath of devastating Nov 26 earthquake.

However, he said, the scarce labor force to deal with construction work is a major concern.

As to application of earthquake affected residents to qualify for reconstruction program schemes, Varfaj informed that there are 61 counters available with 3 311 applications made so far.
He went on saying that 2 700 households have received the rent subsidy totaling ALL 61.4 mln./a.gjonaj/sm/