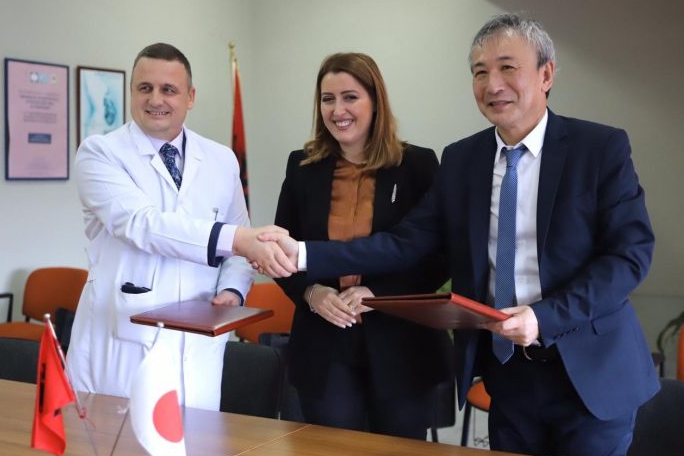 TIRANA, Feb 11 /ATA/ On February 11, a Grant Contract signing ceremony took place at the University Hospital of Obstetrics – Gynecology “KoçoGliozheni”. The grant agreement was signed by H.E. ITO Makoto, Ambassador of Japan to Albania, and Mr. Genci HYSKA, Director of the University Hospital of Obstetric – Gynecology “KoçoGliozheni”. The EUR 76,200 grant will finance the purchase of one ultrasound machine, two neonatal ventilators and one fetal monitor with the aim of improving health care services for neonates and mothers that come to this Hospital.

H.E. Ms. OgertaMANASTIRLIU, Minister of Health and Social Protection, also attended this event. During the ceremony, Ms. MANASTIRLIU expressed her gratitude towards Japan, its Government and Ambassador ITO, for the continued support to the health sector in Albania.

Not long ago, the University Hospital of Obstetrics – Gynecology “Queen Geraldine” has been awarded a similar grant, and very soon another grant will be awarded to the Regional Hospital of Kruja “Dr. Stefan Gjoni”. Beside the grants awarded through the Embassy of Japan in Albania, Japan has supported Albania through JICA as well with projects implemented in 2001, 2004, 2010, and 2017, totaling to approximately EUR 11.5 million.

The Directors of the Hospital also appreciated Japan for this financial assistance underlining the importance that this grant has for the Hospital. Ambassador ITO, thanked the Minister for attending the Signing Ceremony, and expressed his intent to continue supporting the Health Sector in Albania through the collaboration with the Ministry.
/sm/