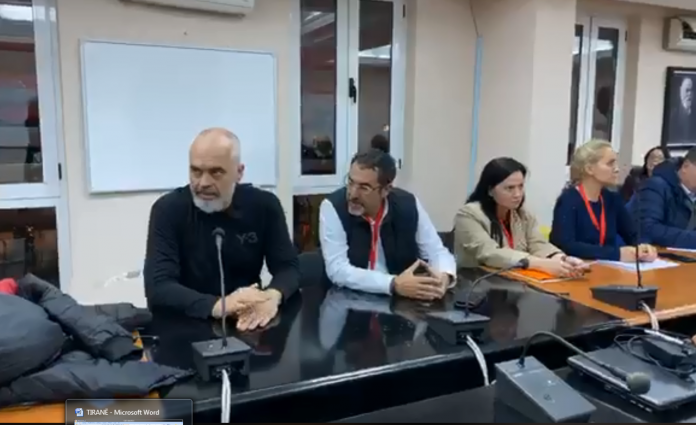 TIRANA, Dec 2 /ATA/ – By I. Vata/- PM Edi Rama at a meeting in Durres Emergencies Centre has urged for prompt accommodation of the persons who have remained homeless, identification of apartment blocks that will be repaired adding that it is the construction companies that will be in charge of their repair and removal of the rubble from the sites of demolished buildings to transform them into parks.

Plenipotentiary Minister in charge of addressing the earthquake consequences, Bledi Çuçi, reporting at the meeting said that the main thing we need to focus on is to increase working groups on the sites.

“We need to increase the number of verification groups. People in fear of their lives following the subsequent tremors, upon learning the news about the arrival of foreign groups ask for assessment of their buildings as soon as possible.”

Çuçi went on saying that plenty of groups have been mobilized. “Right now we are dispatching teams to Lezha since it was included in the emergency map. I believe that after the promises made by international community, we will increase the number of check groups with foreign private companies showing readiness to send in engineers, so in conjunction with private companies I think we will bring the situation under control,” he said.

“People want to know what we are doing and I believe we are very clear at that point because we have taken the decisions at Emergencies Committee, at the govt. as any problem will be solved in the way we have envisaged it to be. The main issue for the emergency staff on the first day was accommodation of the people. I think we have moved on to another stage. The govt. decision on hotel accommodation of the homeless has resolved this issue. We have guided the people to the hotels.

“What we will do now is finalization of a damage assessment form which is a model used by the whole world in the case of damage assessment. This is a good thing because the data will be stored electronically and in a central database which makes it very easy to learn how many objects have been damaged, even their geographical location, “he said.

PM Rama asked for the list of construction companies that have built apartment blocks.
“First, the list of investors who have built palaces which have sustained damage but are fine structurally, but deemed to be in need of repair by Albanian and foreign inspection groups. Tomorrow

I should get my hands on the list. They will be called to repair them all according to parameters laid down by us, in line with all the technical parameters. I want information on their location. No matter if they have gone bankrupt, I want the list of these persons, ”Rama said
/j.p/sm/