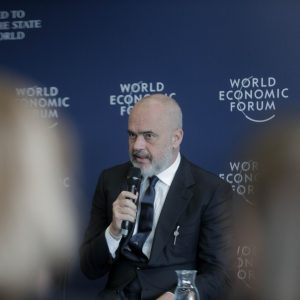 The government head said in his remarks that those who do not understand this, they don’t understand a lot about the stakes and the challenges of today and the future.

“In this moment, we truly feel like a boat at open sea after the compass has been taken away brutally. So, it is very important for us to know. It is very clear that if the EU integration process, at least over the past five or six years, has been characterized by an increasingly growing unpredictability, what happened made it absolutely unpredictable. As we speak, it is no longer possible to know what you need to do in order to get what we are looking for, because it is clear that the nature of decisions within European Council is much more about the EU member states themselves rather than what we do or we don’t. It is much more about what they want for the EU to be or not to be, rather than what they want from us to do or not to do,” the Premier went on saying.

“Our countries are not ready to become members and that’s why if the game of the merit-based is transformed into blaming and just blaming anytime when there is a lack of capacity to make a consensual decision, this is really not making any good to the EU and to the process,” Rama stated.

“Finally I would underline that we didn’t enter this process because someone in Berlin, Paris, or Brussels forced us to do so, but we entered this process because it is exactly what our people, our nation and our children need and we will continue to do it exactly for them. However, we know that our region has a lot of potential to be unleashed and we will do our best to make it possible through increasing the regional cooperation and do our best to avoid the negative consequences this kind of blind decision or non-decision of October backlashes cause on our public opinion, or on our future. Of course, for Alexander it is easier because, as he said, he heads a not so much euro-optimistic nation, but still, I don’t think that since for us is much more difficult, then we have to cry, beg or whatever, because at the end, as I just said, we are doing this for our kids and future generations, and not for this generation of leaders in Europe,” PM Rama stated.