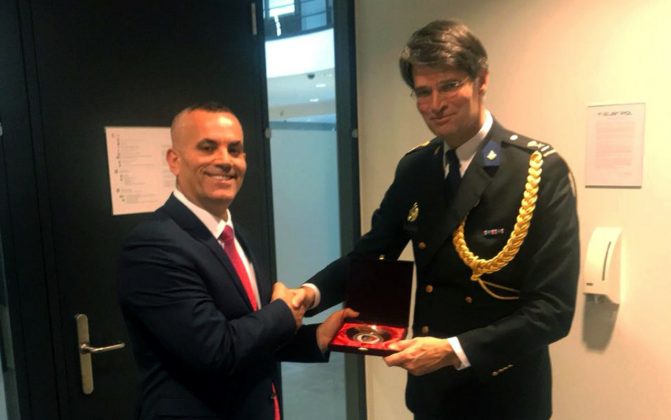 TIRANA, April 6 /ATA/ – Director of State Police Ardi Veliu is on a visit to the Netherlands where he attended the handover ceremony of Europol leadership from Rob Weinright to director of Belgian Police.

After the ceremony, Veliu had a meeting with former head of EUROPOL Rob Weinright, whom he thanked for his immense support towards Albanian Police during his tenure.

For his part, Weinright congratulated Veliu on his new duty and praised the progress of State Police, particularly on the scores achieved in the last months as well as international operations in which the Albanian police have distinguished themselves.

During the visit to the Hague, Veliu met with director of Dutch National Police Force, Erik Akerboom.

Both interlocutors praised the very good cooperation between the two police and explored the possibilities to elevate this cooperation to another level.

Director of Dutch Police Force praised the recent scores in the framework of “Force of Law” operation, measures to deter the phenomenon of asylum seeking and illegal migration.

During his stay to the Hague, director Veliu had meetings with supporting and operational structures of EUROPOL which focused on issues of cooperation, joint operations and assistance in capacity building of State Police.
/e.malaj/ /a.g/sm/